TaylorMade M2 ​​Golf Sets: The Most Authentic Review From The Experts

TaylorMade golf clubs must be no stranger to Vietnamese golfers. Many sets of this famous brand are loved by golfers, including the TaylorMade M2. Join Golftimes to listen to the most authentic reviews of this set of clubs from Golfalot.com expert Martin Hopley – one of the most popular golf blogs today.

The TaylorMade M2 ​​driver has a more rearward center of gravity, making it easier to control and control the club compared to previous generations of TaylorMade drivers. They have the same clubhead shape and Carbon Composite material as the M1 driver but at a more affordable price point.

Which player is the TaylorMade M2 ​​driver suitable for?

This version of the club is suitable for golfers looking for maximum performance on off-center shots. It also gives players the benefit of a higher ball trajectory and is more prone to draw than its M1 predecessor.

Overall, the clubhead, cap, and hosel shape of the 2016 M2 driver are almost identical to that of the M1. The difference lies in the sole of the club. The M2 driver does not have a weight slide, instead, it is equipped with Speed ​​Pocket technology that replaces the M1’s Front Track position at the back of the clubface. The M2 logo and customizable weight block are replaced in the BackTrack position. The overall design of the M2 clubhead is quite nice, giving players a sense of confidence at the address position. If you look down at the cap at the back of the ball, the M2 driver looks no different from the M1. The club’s hat structure is made of many materials, and the black and white two-tone combination makes the clubhead more prominent.

The M2 driver produces a very soft metallic sound compared to the M1. The club feels very light when swinging. This is a point that many people love, however, many players consider this to have a significant impact on the control and consistency of the shot.

The M2 driver was born to replace the previous Aeroburner version. The club head is made of the same 7-layer Carbon Composite material as the M1, which reduces weight and makes the club significantly lighter. The lower and deeper CG center of gravity creates a high MOI. 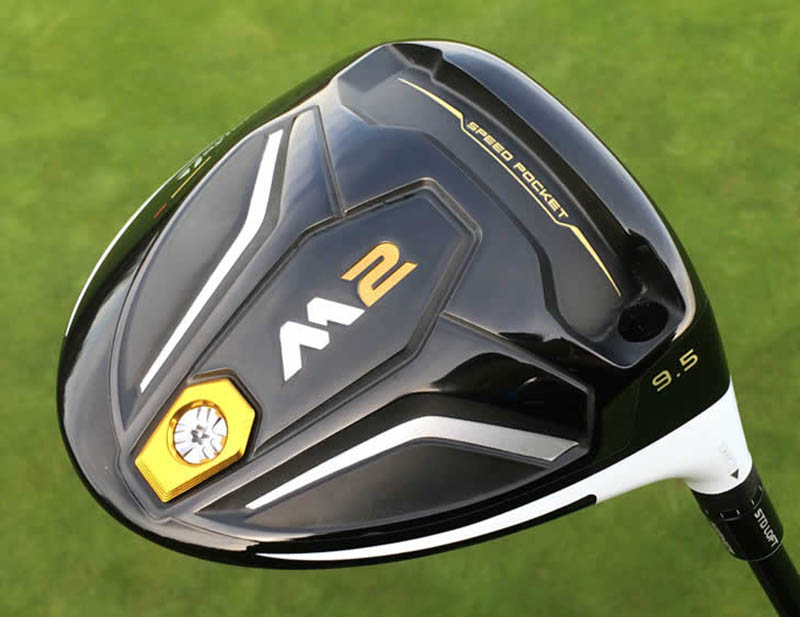 The Speed ​​Pocket on the back of the face makes the face more flexible and powerful, and the ball travels longer distances. In addition, Inverted Cone changes the thickness of the clubface, avoiding ball speed reduction at impact at the clubhead and heel positions. The loft is adjustable in 12 positions allowing a fine-tuning range of about 4 degrees.

Testing with different lofts shows that the distance recorded with the m2 version is similar to the M1. A solid hit with a beautiful mid-high ball. Low spin and straight trajectory, good roll and carry.

Most of these factors coincide with what the company released earlier. Ball speed is still well maintained even with off-center shots. In this respect, M2 has done better than M1.

As mentioned above, steady ball speed is the highlight of the M2 driver. The directional stability is not too impressive but is considered to be on par with the M1 driver. Slightly off-center shots can still maintain speed, but golfers shouldn’t rely on that to make too much damage, because in this case, no matter how good the club is, it won’t change the outcome. fruit.

The characteristic ball trajectory created by the M2 driver is medium height and low spin with draw shots. However, there may be a difference because it depends on the swing technique and swing speed of the golfer.

Golfers who don’t get the maximum distance or aren’t satisfied with the adjustable ball trajectory have a hosel that’s designed to be easily tweaked. This is also an advantage of M2 compared to the Aeroburner driver.

The TaylorMade M2 ​​driver is a clear improvement over the previous Aeroburner line. Although there is no ability to adjust the CG on the sole, more ball speed is preserved when hitting the ball off-center. The price of the M2 is also lower than the previous version of the M1, so golfers can fully own it easily.

The TaylorMade M2 ​​fairway has a higher ball speed and is slightly easier to launch than previous models. However, this version of the wooden club is also considered to have a less attractive sound. In the past few years, TaylorMade has introduced RocketBallz technology golf products. TaylorMade appreciates the role RBZ technology plays in the M2’s great performance by claiming it makes the M2 wood easier to play.

M2 Fairway Woods is just a “miniature version” of the M2 driver, so it has a design quite similar to the driver. The two-tone cap makes the clubhead look much more compact. In terms of size, the M2 is about the same size as modern fairway models: the club head is medium length, round and symmetrical. Interestingly, the clubface looks a bit higher at the toe than the heel.

“I try to be objective about the sound and feel of the club. Some people like the sound soft and soft, some like it lively and explosive. But when it comes to the fairway of the TaylorMade M2, I really don’t like the sound of it. This is the worst-sounding club I’ve hit in years. Its sound is like hitting a stick against a block of wood – Mr. Martin Hopley shares more about his impressions of the sound of the M2.

In addition to the sound, the fairway woods M2 really made an impression. When the club hits the ball, the ball travels long distances and has very low spin. This makes it an ideal choice for powerful shots off the tee if you’re just trying to hit the ball as far as possible. For players who want to hit fairway shots that approach the green accurately, you may need to refer to a different model of the club. In terms of launch, the M2 has a slightly higher launch speed than the RBZ and previous TaylorMade fairways, but it is not rated as the easiest wood to start with and with the highest launch.

Whether your goal is a 2-stroke win on a par 5 hole or finding an alternative to your driver, the TaylorMade M2 ​​is sure to provide you with ball speed and low spin.

The TaylorMade M2 ​​Rescue is an easy-to-play club that is suitable for replacing long irons but offers the same outstanding advantages as other clubs in the M2 range.

From drivers to fairway woods to irons, TaylorMade’s M2 line has proven unbelievably consistent. The performance is ideal for players with high handicaps. This set of irons offers optimal distance and great stability.

The M2 Hybrid, like the AeroBurner, is a large clubhead hybrid. This design makes it easy for high-handicappers to play well. The classic and elegant round head shape echoes previous generations of TaylorMade hybrids. Both the clubhead and face are black. The groove along the sole allows the club to gain maximum speed.

Like the wood of the M2 fairway, the M2 Rescue has a big sound and is sturdy, and solid. A well-balanced clubhead and shaft help maintain stability throughout the stroke, even on off-center shots. Hits that hit the sweet spot will deliver a solid, solid sound, while a light miss has a slamming sound through the clubface.

The M2 rescue club is effective for very long and steady shots. Experimenting with a series of consecutive shots, the result is a ball with little spin and a ball that goes straight, or draws, with a medium trajectory. Unless you’re a slicer, you’ll have a hard time hitting the right side of the course with this club.

Although long and steady balls are highly effective, this club is difficult to send the ball accurately. The combination of medium launch angle and low spin can result in the ball hitting the green more difficult. In case you are looking for a hybrid to replace the 3-wood, this is the perfect choice for you. But if you want accurate shots on par 3 then you should look at other hybrids.

Like the other clubs in TaylorMade’s M2 line, if you’re someone who wants to maximize the distance of the shot, this is the product for you. The large clubhead design also offers great stability. However, it does not provide high accuracy.

The TaylorMade M2 ​​irons represent the next generation of improved irons. The shot is explosive, makes up for the missing distances, and the ball is long and stable. TaylorMade’s recent irons have been geared more towards intermediate and advanced players. The TaylorMade M2 ​​iron is an iron designed specifically for high handicap golfers. Larger and longer clubheads are suitable for players with 20 or more handicaps.

If you’re a high-HDC player looking for a set of irons that can make you feel comfortable addressing, the TaylorMade M2 ​​Irons is the set you should consider. The size of the club head is not too big. Thick topline, rather long clubface. It is so large that it can be mistaken for a hybrid. The TaylorMade M2 ​​iron is a great replacement for the old Burner iron.

Similar to other golf clubs in the series, the Irons M2 has a sharp and loud sound. If you love products with a smooth and soft sound, the M2 iron set cannot meet your requirements. These are distance irons and they definitely feel like a solid piece of metal, making a metallic sound on impact with the ball.

TaylorMade M2 ​​irons are considered one of the best-designed irons. However, it also conquers players thanks to its incredible ability to increase distance. The iron M2 hits will go 5-10 yards farther than you expect. Typically, a shot with a 7 iron will hit 150 yards, but with a 7 M2 iron, the distance increases to almost 160 yards for a regular golf ball, although the launch angle is not higher. Top ball speed is up to 110mph, faster than the average for other 7-irons. M2 iron also polish has a tendency to deflect to the left.

Through the factors analyzed above, it can be seen that the TaylorMade M2 ​​golf club set is an extremely suitable choice for those who are looking to improve distance. The set of clubs has been released in 2016 but so far there are still many golfers who love and want to own this set of clubs. We will continue to send golfers honest reviews of the very hot clubs on the market in the next articles. Thank you golfers for reading!

Top 10 Golf Putting Tips That Will Improve Your Game

10 Best Golf Shoes For Men – A Comprehensive Guide On The Most Popular Brands!

We will be happy to hear your thoughts

Garmin: We’ve got your game with Approach S62

Golf Reviews 0
Deal of the day

Along with the best quality, service, and utilities with a team of experienced professional fitting consultants, helping customers choose the right products to promote the full potential of golfers while saving money. cost and time.